Moving into our 2nd/3rd Week, we've gotten the socialization with humans down pretty quickly, usually shy around new people, wanting to stay close to the parents (which is ok anyway since he's in training to be a service dog) but with other dogs, we've crossed mountains!We live next to a large dog named Ceasar. When Nox first met him he wasn't mean but more frightened due to the fact that he was much bigger than Nox. Mostly hid behind mommy and whimpered. Our first milestone was going to the park and making friends with Sophie and Bella/ Izzy now he seems to be excited to meet new dogs, which is very important to incorporate within the first 6 months. We decided to try our luck with the other dogs in our family, going over to Alex's sister Tori's to see how we'd handle being around a Great Dane Puppy that's 5 months older....
He learned quickly that even though Major was bigger didn't mean he was scary, and had so much fun running around the house til they were both tuckered out! Now that we've got the socializing out of the way and we're at good standing, it'll make it much easier when we get to Petco Puppy Training Classes. Which is important, so they can focus on the training, and not the other dogs. 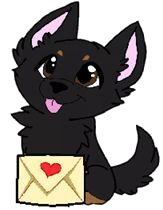